Instead of watching the London Marathon on TV, I decided to head down to Parliament Square (near St Stephen’s Tower , commonly known as Big Ben).  This gave me a great vantage point to see the runners at mile 25.

There is nothing like being in the crowd to fully understand the sheer guts and determination of the courageous runners. With only a mile to go, if any runner stopped or looked like they were flagging, the crowd whipped up such a cheer of support and encouragement spurring them on.

I couldn’t help but notice the many colours of the runner’s t-shirts and vests. They were effectively communicating through colour, the reason why they were running. This came as no surprise as colour is the first thing our brain registers before words or shapes. So even though we may not have been able to read what charity they supported or which running club or organisation they were a member of we could see it by the identifying colour. 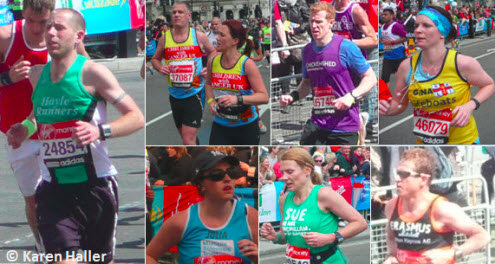 London Marathon 2012. Wearing your brand colour is the easiest way to get recognised.

The most visible colour in daylight is yellow helping the Lifeboats charity stand out. Red is attention grabbing which was advantageous for Virgin, the main sponsor with their branding standing out. The light green of the Macmillan Cancer Support vests were also highly visible due to the high amount of yellow undertone.

There is of course the psychological role colour plays and how it can affect your emotions and behaviour.

The great thing about the London Marathon are the characters who put a big of fun and humour into their run. I had to leave at 14:30 which was before the real characters came past usually weighed down by their costumes. I did however get to see a few that brought a smile to everyone’s face. The loudest cheers definitely went to the runner in a mankini! 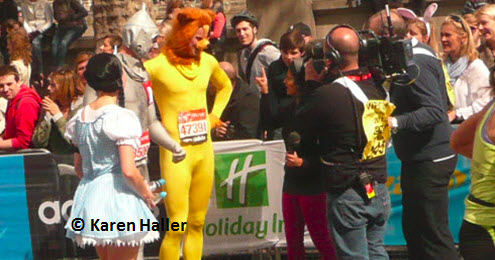 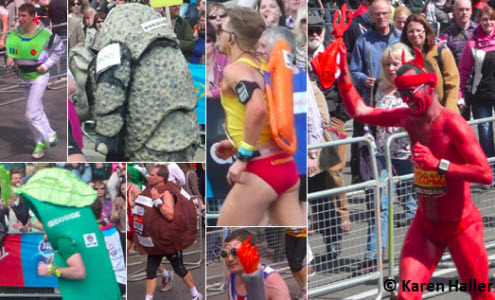 London Marathon 2012 - Some of the colourful characters.

London Marathon 2012 - Some of the colourful characters.

Did you watch the London Marathon? Were you able to see your favourite charity or running club through their identifying colours?