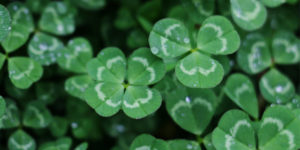 If I asked you what’s the first colour that comes to mind when you think of Ireland, it’s likely to be green. On March 17th, the Irish the world over celebrate their patron saint. But how did the colour green become associated with St Patrick and become their good luck colour?

There are many thoughts on this, however a popular belief relates to the shamrock representing the Trinity, that God is three in one – the father, the son and the holy spirit.

In the 19th century the tradition of  ‘wearing of the green’ started.  This meant wearing an item of green clothing or a shamrock.

No surprise that green is also the national colour.  It’s not called the Emerald Isle for nothing!

Surrounded by so much green, is it any surprise it became Ireland’s lucky colour.

And if we look at the three ways we relate to colour, this comes under colour symbolism, also known as colour in culture.

It’s a day celebrated the world over with Irish music, food, culture and dancing. It was the Irish who immigrated to the US that really embraced St Patrick’s Day.  The New York parade is the largest and most famous of all the St Patrick Day parades with Chicago coming a close second. 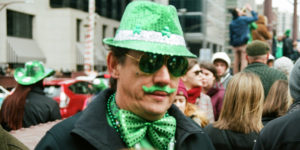 St Patrick’s Day street party, Chicago. Where everyone can be Irish for the day & celebrate! 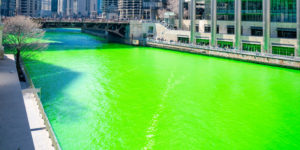 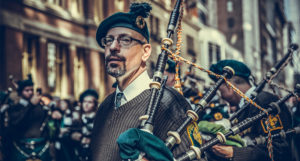 St Patrick’s Day is all about having fun and celebrating, so get your green on and break out the corn beef and cabbage!