The thing I love about radio, they are really tuned into the news of the day, as it’s happening. As a colour expert, I never know when I’m going to be called to comment on the colour stories of the day.

So it was no different last Friday morning when I received a call from Jason’s researcher, the lovely Angela asking if I could be on air in an hour to give my insights on some news stories relating to colour…

First up we spoke about Pippa Middleton’s yellow coat which seemed get the media all excited with the headline ‘How to Stand Out at Races, Pippa Style’ 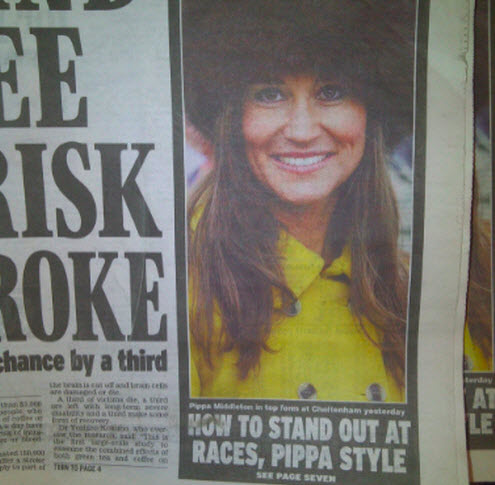 What Pippa did do very well was to wear a tone of yellow which really complimented her colouring. As you can see from the image it was a warm mustard yellow. If she had worn a bright, cold acid yellow she would have looked really hard and strained – such is the effect wearing a tone of colour that doesn’t suit your personality.

Colour and how you feel
Not everyone who wears yellow is doing it to get noticed as Jason suggested. If you are feeling a bit tired or want some cheering up, then wearing the right tone of yellow for you may be all you need. Just remember one of the consequences is – you will get noticed – you can’t avoid that.

A bundle of orange fun!
Jason wanted to know what I thought of his bright orange winter coat. I did chuckle a bit as clearly our Jason isn’t the shy, retiring type as you can see from his twitter picture below which he took especially so I could see it. 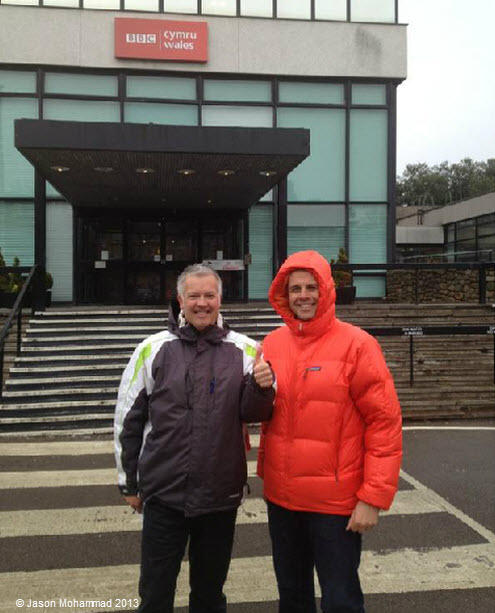 So why does he wear it? It goes further than there only being two colour choices in the store. If you don’t resonate with that colour you aren’t going to buy it.

Wearing this colour for Jason may be a conscious association, of a happy memory. Maybe by wearing it he feels happy and makes him smile. Maybe it’s the perfect pick-me-up when he is feeling a bit tired during the grey winter months. This will be personal to him.

He has quite a fun, fast interview style and when the interview ended I did say to Angela, Jason really is a bundle of orange – fun, playing, cheery and happy!

Red Vs White
I think Jason is the Welsh Ruby number one super fan and given Wales was going to play England on the weekend I knew what was coming next. What does red and white mean?

The colours a team wears can play a psychological game as well. The Welsh team uniform is red. It’s the colour of stamina, power, physical courage and strength – so it’s no surprise it’s the colour that represents masculinity. One of the negative traits of red is aggression. Imagine having a wall of red hurdling towards you – it’s pretty fierce.

England on the other hand wears a white uniform. Research shows it is a symbolic choice as white was the colour worn at Ruby school. White represents clarity of thought, clear thinking which is a way to play a tactical game.

And in case you are wondering, Wales won by a resounding 30-3.

So thinking about your favourite colour or colours, how you feel when you wear them? I’d love to know your thoughts on this, why not leave a comment below.

Hope you enjoyed the interview. If you’d like to know more, check out:
BB Radio Wales Interview – Do Men who Wear Pink Shirts Really Earn More
How colour can affect how you feel and how other interact
The power of colour psychology