are we walking into a colourless future? 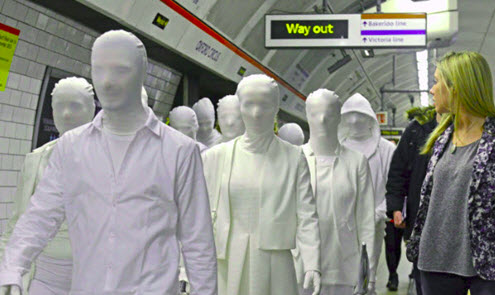 Imagine a world without colour. A world of silver, white and grey. If we are to believe the research carried out by Dulux in March the future looks, well, rather dull, drab and dark.

Why were we so in love with colour and felt free to express our colour choices and experiment in the 60’s, 70’s and 80’s and then to watch it slowly slide into an almost colour abyss from the ‘90’s?

Given that colour has an amazing ability to lift our spirits and instantly change our mood and behaviour, bringing so much joy and happiness into our lives, why are so many of us choosing to move towards a colourless future?

I’m one of these people who is always curious, always wanting to understand why, so I called up my good friend Nicholas Haines. Nick is an unusual thought leader who uses ancient Chinese philosophy to explain and understand complexity and the patterns that are running behind our behaviour, as well as social, economic and political trends. I wanted him to explain why he though we have moved from a colourful past to a potentially colourless future, and if we’d see a colourful world again.

Having read The Times article (which I’ve included below for you to read in full), Nick quickly sees the simplicity in it all. He says we’ve moved from a situation of absolutely knowing where we knew when we would leave school, get a job and stay in that job for years, sometimes for life. Technology wouldn’t change much or evolved slowly. We knew how things were going to be. Life was relatively simple. 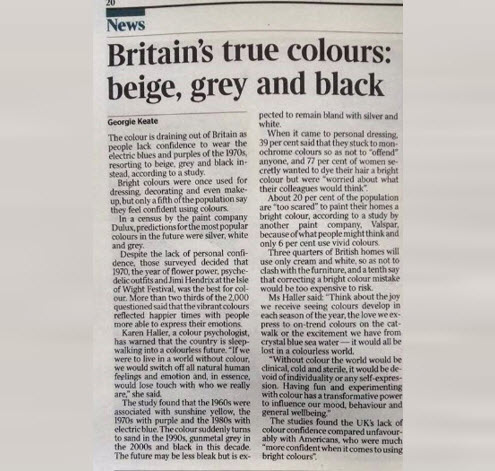 The Times | 11 March 2015 | The apparent warning attributed to me that the country is sleepwalking into a colourless future was actually from Dulux, not me. Thought I’d just clarify that…

This was the 60’s, 70’s and 80’s and we felt safe and secure. It was a known situation which enabled us to have very complicated colour palettes and highly saturated colours, busy patterns because we weren’t fundamentally confused. The feeling of safety and routine and knowing in our everyday lives, meant (for the majority of us) our brains were able to cope with the complexity out in the world with brighter colours because we weren’t confused internally.

As we moved in the 90’s the 00’s and now the 10’s we have seen the world change and shift at a rapid pace. The forever rapid changes to technological, lack of job security, no longer having a job for life, living more in a global marketplace, global communications, evolving at a much quicker rate than we can often take in.  We become confused and overwhelmed by the speed of everyday life.

So how do we deal with that? We do whatever we can to simplify the overwhelm, the overload and the confusion.

And the casualty of this is colour.

So it’s no co-incidence as Nick says that when we were beginning to see the shift in the speed and overwhelm of our lives we also started to see the around the same time colours shifting to a more simplified colour palette of greys, whites and black.

And from a colour psychology perspective, it’s not surprising these colours were being picked up on. Looking at some of the psychological traits of white, it communicates clarity, simplifying, sterile, clean, needing space. Grey is the colour that hides the personality whilst black allows you to hide, to not be seen, to be left alone.

With my fascination in colour psychology, the interesting point that Nick makes is that what people are really connecting with here is their emotive response to colour.

We are going into emotional overwhelm.

Everything that we knew, our routine, our safety, has been disrupted and there is so much change. The one thing we can control is the emotive noise and we do that on an unconscious level with the colours we choose to surround ourselves with. We don’t even know it’s happening.

As Nick so rightly puts it, it’s an emotional overwhelm response. We find ways to minimise where the overwhelm is. And bright colours, complicated colours palettes and mixes is too overwhelming for most.

Why does this affect some people and not others? Nick explains that some people are able to deal with complexity because they are certain even in an uncertain world and therefore have the ability to bring in the addition of colour and emotion. Others who aren’t certain, who find having too much complexity in their life or any level of lack of understanding uncomfortable will look for simpler colour palettes.

So if we live in a world of change and one that is constantly changing does that mean we’ll never see the full bloom of colours back in our lives? Is the predication true, are we really sleep walking into a colourless future?

I asked Nick is it just a matter of us getting used to the new norm, where uncertainty become the certainty? His reply was we all have our own energy tempos at which we manage and adjust to change and this is likely to be reflected in the colours we choose to surround ourselves with.

The good news is colour is on its way back… for some it never left.

Nicholas Haines, founder of the Five Institute and creator of The Vitality Test.

The article ‘Britain’s true colours: beige, grey and black’ appeared in The Times on March 11th 2015.