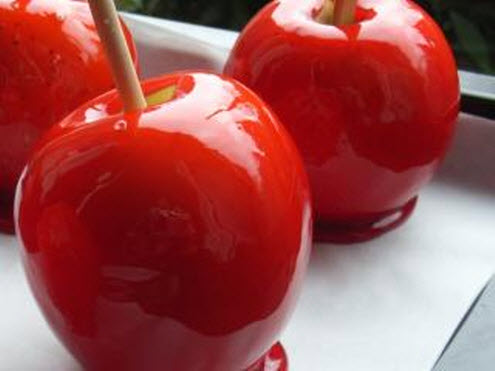 I was asked a question from one of my Twitter followers, @AngelaClutton “Quick colour Q for you: toffee is toffee colour (obvs) yet some toffee apples have bright red coating. Colour psychology?!?!”

Toffee apples have certainly become a common treat during autumn festivals, particularly in western cultures in the northern hemisphere. This is because these festivals fall during the apple harvest.

Here in the United Kingdom, toffee apples are more commonly eaten on November 5th which is Bonfire Night (otherwise known as Guy Fawkes Night) whereas in the US they are eaten on Halloween.

history of the red toffee apple
According to the Newark Evening News 1964, William W. Kolb invented the red ‘candy’ apple. Kolb produced his first batch of candied apples in 1908. While experimenting in his candy shop with red cinnamon candy for the Christmas trade, he dipped some apples into the mixture and displayed them in his store windows. They were an instant hit, selling thousands yearly.

red gets you noticed
Toffee is well, toffee coloured… a tone of brown. If Kolb had put these in the window I wonder if they would have even been noticed.

Red on the other hand is the colour that gets noticed. This is because it is the colour with the longest wavelength and even though it isn’t the most visible, it has the appearance of being nearer than it actually is, attracting our attention – it says ‘look at me’.

We also eat with our eyes. I think you’ll agree red is a more attractive colour to the eye than brown (except when it comes to chocolate).

So, it does seem that Kolb’s experimented with just the right colour!

If you love the colour red you can check out my other red related blog posts.

Part of my 30 blogs in 30 days challenge series. Check out my other posts.