Colour Professionals – Get ready to ride the next colour wave 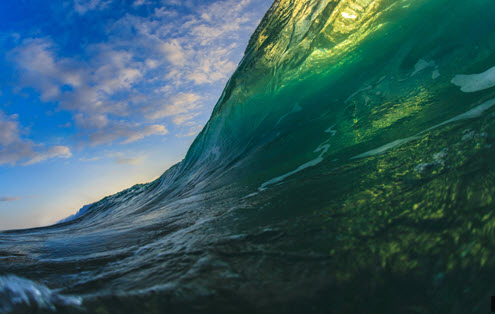 Everything comes in waves, in cycles. Fashion designers, economists and historians will attest to this and looking back through the history of colour use in society so do I. That being the case I thought it would be an interesting exercise to chart how the wave of colour has ebbed and flowed over the past decade and, more importantly, where we are now in relation to current colour thinking.

Starting at the beginning of the 20th century we can see a distinctive pattern of the colour wave that is linked not just colour falling in and out of favour, but also closely tied to an evolutionary change in society.

The Early 1880’s
This period introduced the Art Nouveau style which crested around 1890 – 1905 and exemplified colour in fields of architecture, art and design which had not been seen before.

But by the eve of the First World War this wave had completely collapsed.

The 1920’s
The next important wave began to build momentum in the 1920’s with Johannes Itten, one of the teachers at the famous Bauhaus school of art. He encouraged his students to explore, connect and apply colour to their pieces and in doing so noticed they were favouring certain tones of colours.

The result of this colour wave was the Art Deco movement typified by the use of lots of colour that lasted well into the 1930’s. This use of colour reflected the thinking of this time – freedom from the war, rights for women and the “roaring twenties” a decade of unprecedented affluence.

It is, therefore, already easy see the world of design was embracing the emotional connection and the sensory experience of the time.

The sensory experience of war of course is survival. And as a response to the overwhelm and chaos of WWI it is not surprising that this was a time when the Western world was once again stripped of colour.

When it comes to design, a clear casualty of war is anything viewed as the purely aesthetic, unnecessary ornamentation and the visually pretty, leaving us with only the form, function, and the practical side of design. The result is a severing of the emotional connection and the sensory experience of design.

The need to build houses quickly is a perfect example. The design focussed on everything that was practical and functional and the standard colour palette was concrete grey and white. Cold and austere just like the economic times.

In the 1920’s Le Corbusier said  a house was “a machine for living in” and called for a “calm and powerful architecture” built of reinforced concrete and steel without any ornament or frills. Purism. Purist rules would lead the architects to refining and simplifying design, dispensing with ornamentation. After WWII this was adopted by many and architecture became as efficient as a factory assembly line and colour was nearly completely forgotten.

The 1960’s, 70’s & 80’s
By the 60’s we see relative stability return, we felt safe and secure in our everyday lives. We saw colour starting to make a return. As we were getting our confidence back, we explored colour again for our home and became quite adventurous in colour combinations, patterns and design styles. This adventure in colour was a reflection of their desire to assert independence, rebelling against society’s norm and with more disposable income came more choice for self expression.

The 90’s, 2000’s and early 10’s
As we moved into the 90’s, 2000’s and then into 10’s we experienced the world change and shift at a rapid pace through technology, global markets and global communication.
Plunged into austerity the majority of us experienced difficult economic conditions resulting in job loss and lack of job security We easily became confused and overwhelmed with everyday life.

Change was happening much quicker than we could often take in. In other words we were fighting a very different kind of war, a war with uncertainty. And as with WWII once again colour became a victim. This fall in the colour wave is typified through the wide adoption of neutrals as a means of shutting down our emotions. As we curled up into a protective mode in order to feel safe and shut down the overload what we really achieve is the widespread condition of giving up hope.

Mid 2010’s and beyond
We can see that the laws of momentum have been causing the colour wave to ebb and flow throughout recent history, so where is it now?

Over the past year I’ve been noticing an interest in colour again, a strong indicator that we are heading for a new crest.

However, unlike the last high wave in the 60’s and 70’s what’s different this time around is people are increasingly interested in wanting to use colour to express not just themselves and their personality but also to enhance their lifestyle, health and well-being. They no longer want to shut themselves down emotionally or to follow trends slavishly but instead to use colour cleverly.

When people feel safe they feel more confident to experiment and to express themselves through colour.

You can see it in the TV commercials, in the advertisements where so many big brands are using colour not just in the colour choices available but as their actual campaign.
We are about to ride another colour wave, actually it is more than a wave, it is a colour revolution.

And even though the wave of colour is clearly cyclical each new surge is still a revolution, a revolution in thinking, in society and sophistication within design.

In my e-book I refer to this time in our history a new colour paradigm – a new way of thinking about and using colour that reflects the individual, supports emotions and creates spaces that nurture positive behavioural responses.

Using colour cleverly allows it to influence, not just adorn.

We now want our colour choices to do more than ever before. We want them to reflect and fulfill our emotional needs as individuals, homeowners and business owners. It’s a big ask. And one that can only be addressed through the appropriate and skilled use of applied colour psychology.

Get ready, the revolution is coming
If you’d like to enhance your ability to work with colour at this evolutionary time, then the exciting news is that this year I will be offering more colour courses and mentoring than ever before. While the full list of these has not been released, you can find a taster of a few by clicking here.

And if you haven’t already downloaded my latest e-book, that’s here.