colour in nature… seahorses, colour chameleons of the sea

When it comes to animals being able to change colour, seemingly at will, I just had to know more… what I’ve learnt is just amazing. A friend of mine, Akil Gordon-Beckford just happens to be one of the leading UK Aquarium designers. What he doesn’t know about seahorses isn’t worth knowing.  Here’s the abridged version…

colour protection
As Seahorses are very poor swimmers, they have come up with a very ingenious way to protect themselves from danger…. they are able to translate the colour that they see in their surroundings and accurately express it through their skin. This is known as habitat mimicry or crypsis. This ability to blend in with the surrounding habitat enables the seahorse to catch food whilst avoid being eaten. The perfect camouflage. How clever is that!

Thinking back to when I saw them diving, they were always brownish/green in colour. I see now they were blending in with the seaweed. 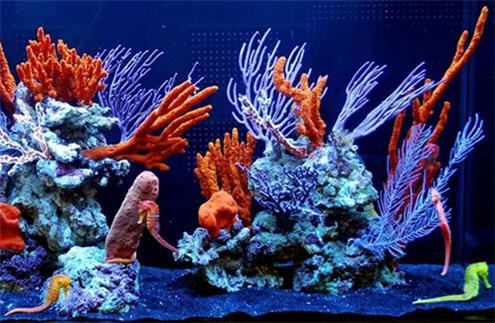 Seahorses turning on a stunning array of colours under the inflorescent blue lights of the aquarium. 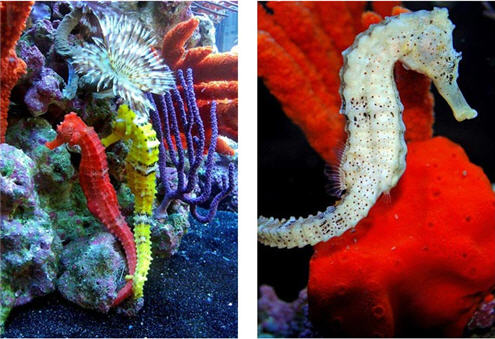 A seahorse that is white has all of its colour cells contracted so that all the wavelengths of visible light are reflected back to the observer.

colour in courtship
We wear colours to show others how we are feeling about ourselves and how we want others to interact with us. Well, it appears Seahorses do the same thing. They are able to change colour as a social mechanism during courtship to communicate a readiness to mate and reinforce the bond. Both sexes change colour during this period to coordinate the transfer of eggs from female to the male.

Check out this video. The purple one is the male.  Note the subtle colour changes especially at the beginning! That’s him greeting and initiating courtship… yes, you’re watching seahorse fore-play!

There are around 35 species of Seahorse and they all have the ability to change colour, however some species have a greater repertoire of colours than others. Their colour can also reflect health, stress levels, and over all physical condition.

They truly are the chameleons of the sea!

About Akil: Akil Gordon-Beckford is one of the leading UK Aquarium designers. Bsc Honours in Biology and Ecology (specialising in animal behaviour and aquatic science). His company, Aquafront specialise in creating bespoke aquariums that connect people to the beauty and inspiration of nature.